Screening for congenital heart disease; will early discharge be its ruin?

In 2017 the Canadian Pediatric Society published the practice point Pulse oximetry screening in newborns to enhance detection of critical congenital heart disease.  In this document we recommended universal screening for CCHDs but stressed the following:

“Recognizing that delivery and time of discharge practices vary across Canada, the timing of testing should be individualized for each centre and (ideally) occur after 24 hours postbirth to lower FP results. And because the intent is to screen newborns before they develop symptoms, the goal should be to perform screening before they reach 36 hours of age.”

This recommendation was put in place to minimize the number of false positive results and prevent Pediatricians and Cardiologists nationwide from being inundated with requests to rule out CCHD as earlier testing may pick up other causes for low oxygen saturation such as TTN.  The issue remains though that many patients are indeed discharged before 24 hours and in the case of midwife deliveries either in centres or in the home what do we do?

A Population Study From the Netherlands May Be of Help Here

Researchers in the Netherlands had a golden opportunity to answer this question as a significant proportion of births occur there in the home under the care of a midwife. Accuracy of Pulse Oximetry Screening for Critical Congenital Heart Defects after Home Birth and Early Postnatal Discharge by Ilona C. Narayen et al was published this month in J Peds. About 30% of births are cared for by a midwife with about 20% occurring in the home. The authors chose to study this population of infants who were all above 35 weeks gestation and not admitted to an intensive care nor had suspicion of CCHD prior to delivery. The timing of the screening was altered from the typical 24-48 hours to be two time points to be more reflective of midwives practice. All patients were recruited after birth with the use of information pamphlets. The prospective protocol was screening on 2 separate moments: on day 1, at least 1 hour after birth, and on day 2 or 3 of life. The criteria for passing or failing the test are the same as those outlined in the CPS practice point. As part of the study, patients with known CCHDs were also screened separately as a different group to determine the accuracy of the screening test in patients with known CCHD.

There were nearly 24000 patients born during this period. Only 49 cases of CCHD were identified by screening and of these 36 had been picked up antenatally giving a detection rate of 73%. Out of 10 patients without prenatal diagnosis who also had saturation results available the detection rate was 50%. Three of the misses were coarctation of the aorta (most likely diagnosis to be missed in other studies), pulmonary stenosis (this one surprises me) and TGA (really surprises me). The false-positive rate of pulse oximetry screening (no CCHD) was 0.92%. The specificity was over 99% meaning that if you didn’t have CCHD you were very likely to have a negative test. Not surprisingly, most false- positives occurred on day 1 (190 on day 1 vs 31 infants on day 2 or 3). There were five patients missed who were not detected either by antenatal ultrasound. These 5 negatives ultimately presented with symptoms at later time points and all but one survived (TGA) so out of 24000 births the system for detecting CCHD did reasonably well in enhancing detection as they picked up another 5 babies that had been missed antenatally narrowing the undetected from 10 down to 5.

Perhaps the most interesting thing about the study though is what they also found. As the authors state: “Importantly, 61% (134/221) of the infants with false-positive screenings proved to have significant noncardiac illnesses re- quiring intervention and medical follow-up, including infection/ sepsis (n = 31) and PPHN or transient tachypnea of the newborn (n = 88)”

There are certainly detractors of this screening approach but remember these infants were all thought to be asymptomatic. By implementing the screening program there was opportunity to potentially address infants care needs before they went on to develop more significant illness. Under appreciated TTN could lead to hypoxia and worsen and PPHN could become significantly worse as well. I think it is time to think of screening in this way as being more general and not just about finding CCHD. It is a means to identify children with CCHD OR RESPIRATORY illnesses earlier in their course and do something about it! 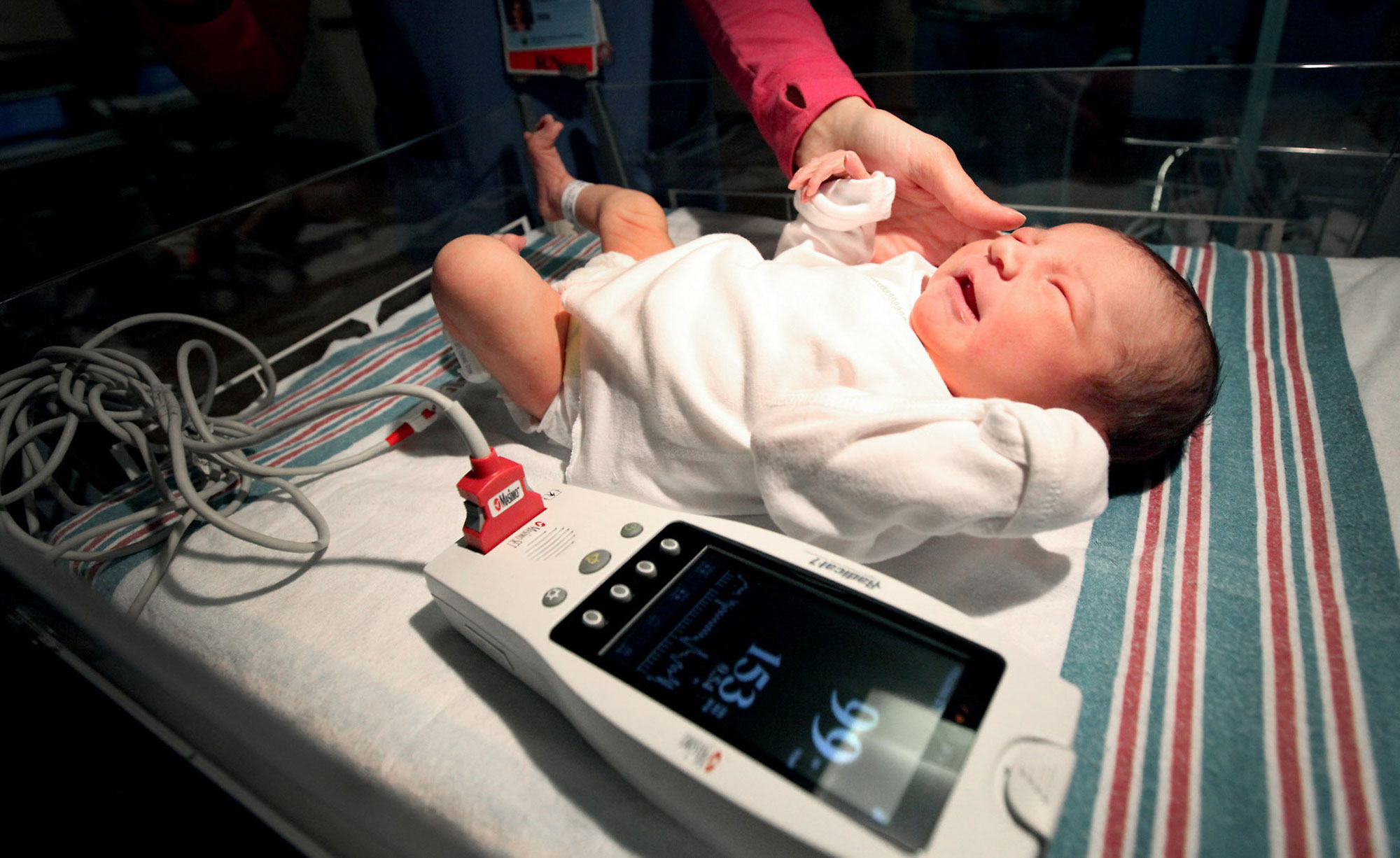 As evidence mounts for the use of pulse-ox screening to detect congenital heart defects a few key points have arisen.  The evidence comes from many publications but one of the best which summarizes the body of evidence is the systematic review by  Thangaratinam S which included over 200000 asymptomatic newborns.  The key here is to note that as this is a screening test if there are symptoms of congenital heart disease one should be referring to a specialist to rule out a significant CHD rather than spending time with such screening tests.  The four points to highlight though are:

Is there a danger in screening too early?

As you screen closer to birth the risk of detecting conditions leading to desaturation which are not CHD rises.  Common conditions such as TTN or mild pulmonary hypertension may mimic CHD and lead to a false positive finding.  Thinking of the hospital environment, how many patients are sent to triage beds on a daily basis with tachypnea and mild desaturation?

This month the first real assessment of screening in the home environment was completed by Cawsey MJ entitled Feasibility of pulse oximetry screening for critical congenital heart defects in homebirths. This study describes in a retrospective fashion the results of applying a pulse-ox screening protocol in the UK to 90 babies screened at 2 hours of age.  This study is important as the typical early discharge of patients from birth centres or could potentially benefit as well by having the results of such work available.  Out of the 90 patients screened 4 had abnormal results and after rescreening two were normal but 2 were persistently abnormal and required admission for further workup.  Neither of the two had CHD but were diagnosed with congenital pneumonia.

This yields a false positive rate of 2% or about 16 times as high as screening after 24 hours.

How do we apply the results?

As the saying goes “something is better than nothing”.  In the home or birthing centre environment, waiting until after 24 hours to perform the screen may not be possible either due to the midwife leaving after the delivery or in the case of a birth centre the couple leaving before 6 hours as is the case in our local centre.  As I see it all is not lost in doing screening in such circumstances early as one may detect TTN, pneumonia or another vascular condition such as PPHN before it becomes symptomatic.  Intervening earlier in the course of the illness may actually result in better outcomes for the infant.  We have to be careful though when looking at the ability of this screen to detect CHD.  The truth is there are not enough patients screened in this study to really draw any conclusions.  With an incidence of about 1:100 births a sample of 90 patients would be lucky to find one patient so the absence of any detected patients is not surprising.

The study though does draw attention to a couple important points.  First as mentioned above, the midwife has the opportunity by screening early to detect ANY cause of desaturation and then plan for further management.  Secondly, it does raise the question with a 2% false positive rate whether screening programs regardless of home or birth centre should include follow-up by a midwife after 24 hours to do testing.  My vote would be a resounding yes.  If applied to a population there would certainly be kids detected with CHD over time and reducing the false positive rate is important in terms of the downstream consequences of overwhelming our Cardiology colleagues who would ultimately need to see such patients to rule in or out significant CHD.

I am not a midwife, nor do I attend home or birthing centre deliveries but I would ask that the consideration of such screening programs consider the timing of testing as sending 2 per 100 deliveries vs 1 in 1000 deliveries for further assessment to rule out CHD is something that our overwhelmed health care systems need to consider strongly.