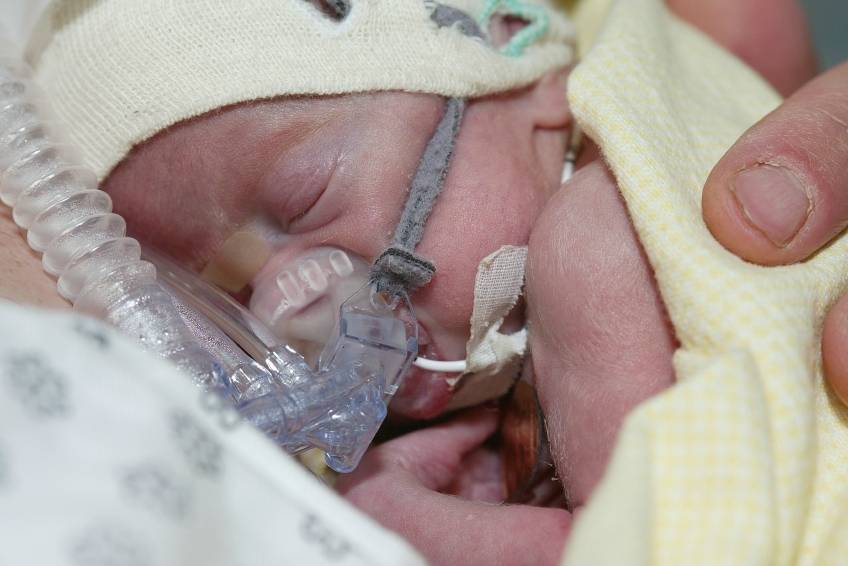 What a hard topic to resist commenting on.  This was all over twitter and the general media this week after the New England Journal published the following paper; Antenatal Betamethasone for Women at Risk for Late Preterm Delivery.  The fact that it is the NEJM publishing such a paper in and of itself suggests this is a top notch study…or does it?

That is the central question the authors here sought to answer. Would women who had a high risk of delivering during this time period have less risk of a composite primary outcome of treatment in the first 72 hours (the use of continuous positive airway pressure or high-flow nasal cannula for at least 2 hours, supplemental oxygen with a fraction of inspired oxygen of at least 0.30 for at least 4 hours, extracorporeal membrane oxygenation, or mechanical ventilation) or stillbirth or neonatal death within 72 hours after delivery.

On the surface this seems like a very worthwhile set of outcomes to look at and the authors found in the end some pretty remarkable findings in a total of 2827 women randomized to placebo or betamethasone. 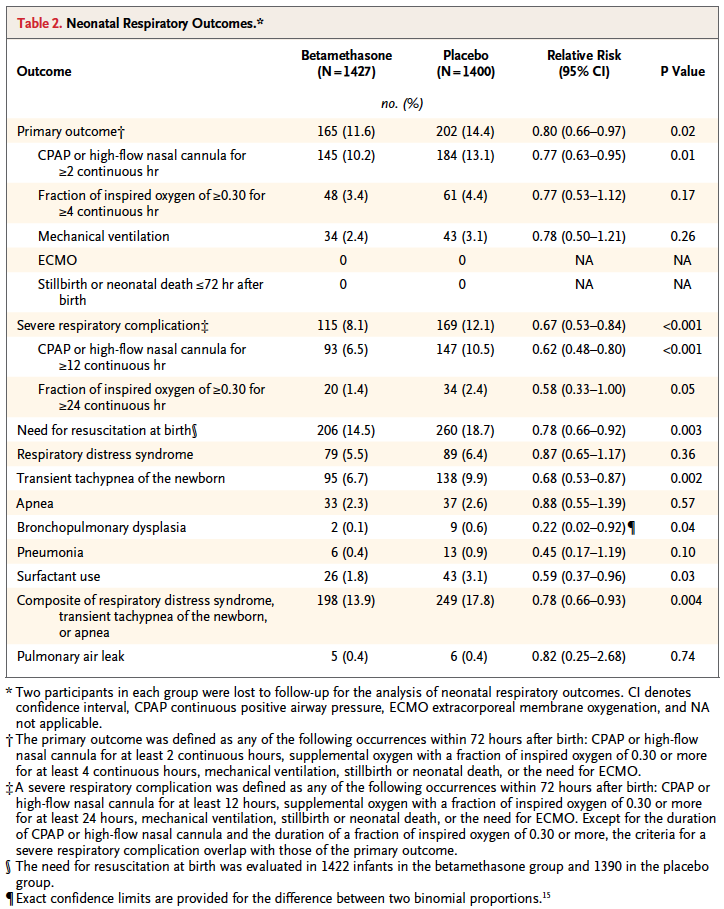 Looking at the results one sees that the primary outcome showed a significant difference with 2.8% less infants experiencing these conditions. However, when one looks at the details the only contributor to this difference was the need for CPAP or HFNC for >= 2 hours.  A need for over 30% FiO2 for > 4 hours was also not different.  No differences were noted in mechanical ventilation, ECMO, deaths whether stillbirths or neonatal deaths.  Curiously, significant differences for secondary outcomes were seen with incidence of severe respiratory distress, and need for CPAP for over 12 hours.

These results are not truly that surprising at least for the primary outcome as if you asked most people working in the field of Neonatology how likely death, need for ECMO or even mechanical ventilation are from 34 – 36 weeks they would tell you not very likely.  The other thing to consider is that the only real significant difference was noted for infants needing CPAP or HFNC for at least 2 hours.  While this would interrupt maternal infant bonding, it wouldn’t necessarily mean an admission but rather in some cases observation and then transfer to the mother’s room.

To answer this question you need to know the best and worst case scenarios I suppose. Based on the reduction of 2.8%, you would need to treat 35 women with betamethasone to avoid the primary outcome but of course there is a range based on the confidence intervals around this estimate.  The true estimate lies somewhere between 18 – 259 to avoid the outcome.  Having said that, the estimate to avoid severe distress is 25 patients with a range of 16 – 56 which is pretty good value.  In a perfect world I would probably suggest to women that there seems to be a benefit especially if one notes that in this study only 60% of the women received 2 dose of betamethasone so if rates of administration were higher one might expect and even better outcome.  Ah but the world is not perfect….

There is only so much betamethasone to go around.

I find it ironic but the same day that this article came across my newsfeed so did a warning that we were about to run out of betamethasone vials in a certain concentration and would need to resort to another manufacturer but that supply may also run out soon as well.  The instructions were to conserve this supply in the hospital for pregnant women.

In Canada as reported by the Canadian Neonatal Network in 2010,  38.1% of babies admitted to NICUs were below 34 weeks.  Given that all babies would be admitted to NICUs at this gestational age and below that likely represents the percentage of births in those ages. An additional 31.8% or almost an equal number of babies will be born between 34 0/7 to 37 0/7 weeks meaning that if we were to start treating women who were deemed to be at risk of preterm delivery in that age range we would have a lot of potential women to choose from as these are the exact women in this strata who actually delivered early in Canada.

If I am forced to choose whether to give betamethasone to the mothers under 34 weeks or above when the resource we need is in scarce supply I don’t think there is much choice at all.  Yes, this article comes from a reputable journal and yes there are some differences some of which are highly significant to consider but at least at this time my suggestion is to save the supply we have the babies who will benefit the most.