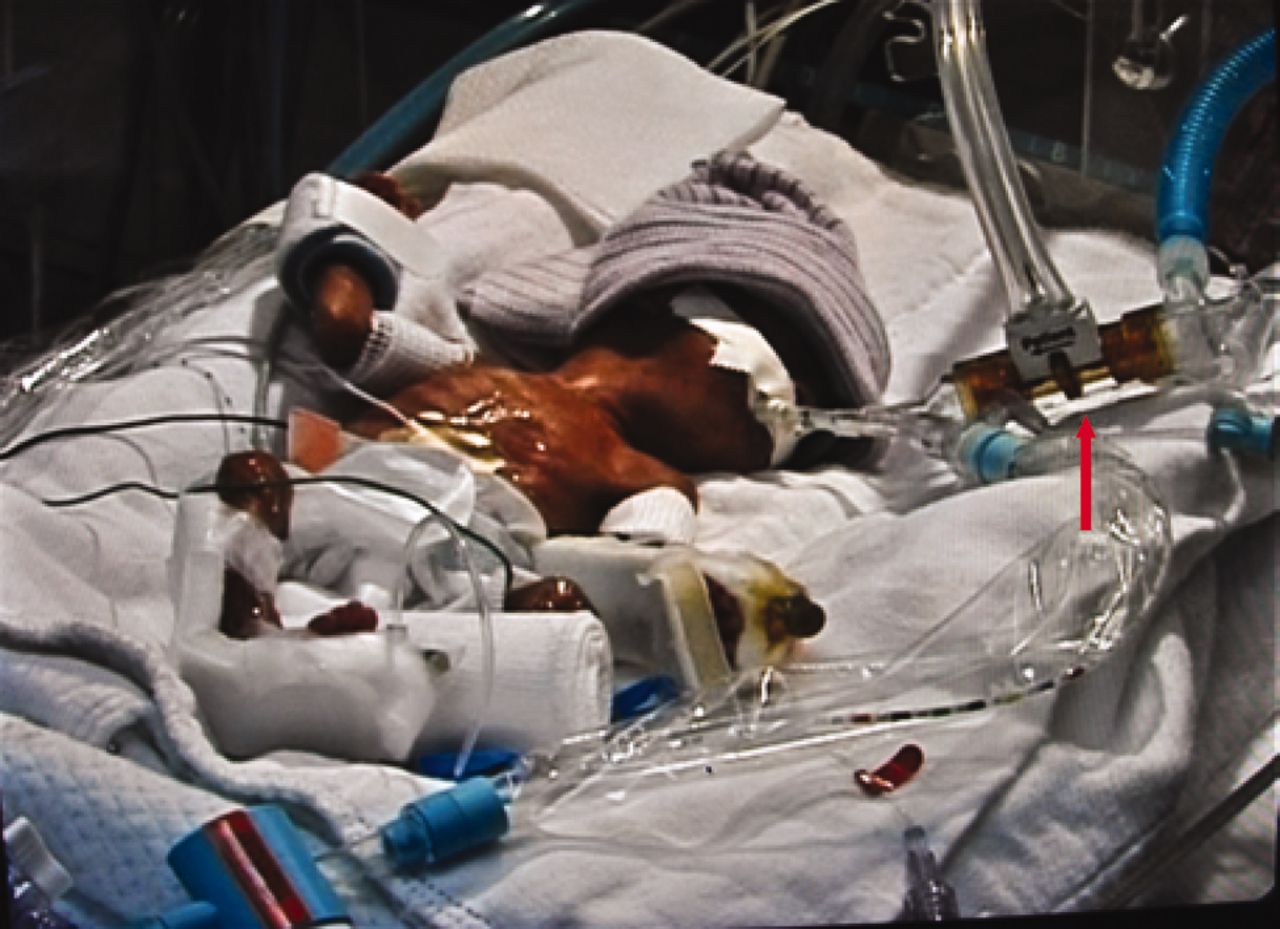 In our journey as Neonatologists and interdisciplinary teams we are forever seeking to rid or at least reduce the plague of BPD in the patients we care for.  The PREMILOC trial was a double-blind, multicenter, randomized, placebo-controlled trial designed to test just that concept by introducing a low dose of hydrocortisone within 24 hours of birth. They   enrolled infants born between 24 – 26+6 weeks of gestation  and assigned them to receive either placebo or low-dose hydrocortisone 0.5mg/kg twice per day for 7 days, followed by 0.5 mg/kg per day for 3 days.  The trial has been the subject of a previous post A Shocking Change in Position. Postnatal steroids for ALL microprems?  Although the trial was stopped early due to financial concerns the authors demonstrated a 9% reduction in BPD using this strategy.  The theory here in part is that the presence of hydrocortisone reduces inflammation and that this in turn may allow for better growth of lungs with time.

Why Not Adopt The Results Based on These Fantastic Results?

Steroids in preterm infants have a bad name.  As discussed in previous posts on the topic the concern in all trials has been the potential impact of such medications on the developing brain. A nice summary of these concerns can be found in a paper in the CMAJ by the other “Canadian Neonatal Blogger” from 2001 in which he quoted the risk of cerebral palsy increasing from about 1 in 6 babies to 1 in 3 if babies born at < 28 weeks were exposed to postnatal steroids.  Neurodevelopmental impairment overall would change from 1 in 4 to 1 in 3 if such exposure occurred.  This paper and others expressing concerns over the effect of postnatal steroids led to a change in practice from more ubiquitous use to one restrained to only in those cases where the patient was nearing the end of all other options.  This meant holding out for such therapy until such patients were at 90% or more O2 and on high mean airway pressures.  Although not formally studied I was very concerned at the time with using this approach as I felt it was a “fait de complet” that they would either die or have significant developmental impairment should they survive due to the complications of having such severe BPD.  It is critical to note though that the outcomes from these long term studies were in infants exposed to much longer courses of dexamethasone and at high doses that are used today.

Over the years with the development of the DART protocol and other more gentle approaches to steroids we as a group relaxed and certainly rescue courses of lower dose steroids have crept into practice when patients seem to be “stuck” on the ventilator.

The results of the PREMILOC follow-up study are now here and in short they look good.  Patients were followed up at an average age of 22 months and included a medical history, anthropometric measures, respiratory status, standardized neurological examination based on specific definitions of disabilities, and quantitative neurodevelopmental assessment using the revised Brunet-L.zine (RBL) scale.  Follow-up was 93% in the hydrocortisone and 90% in the placebo arm which is important as we need not worry about the missed patients influencing the results to a significant degree if they had been included.  Although some post-hoc analyses were done what I am most interested in is the primary outcome which is shown below. 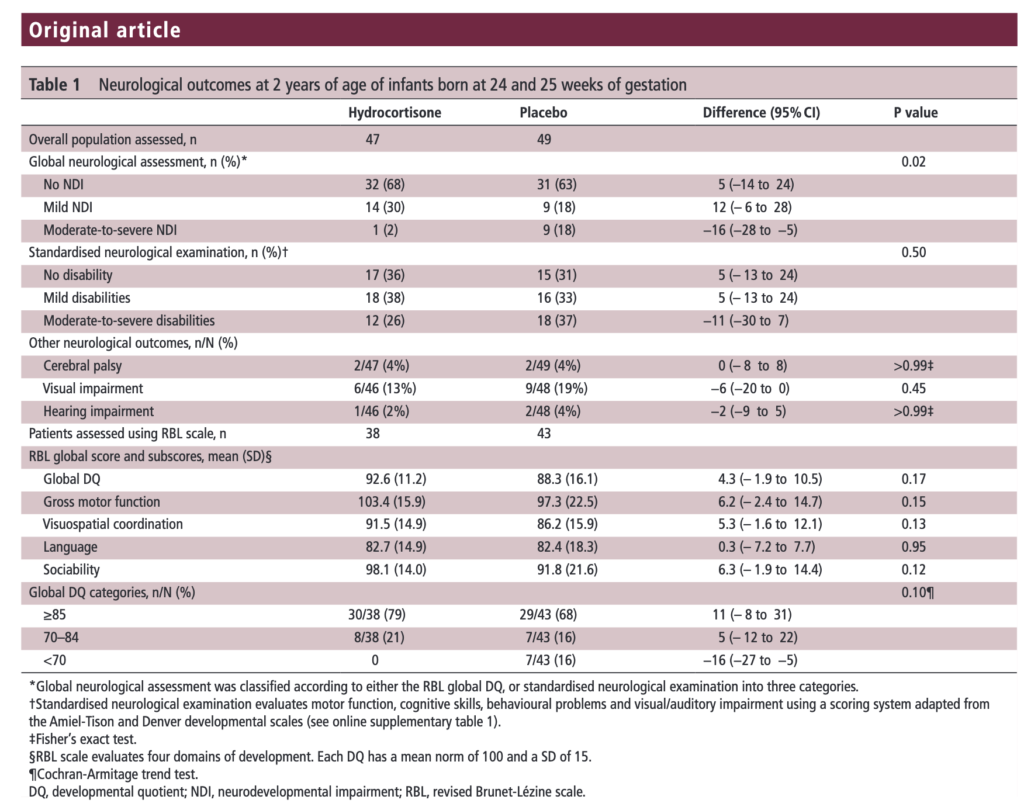 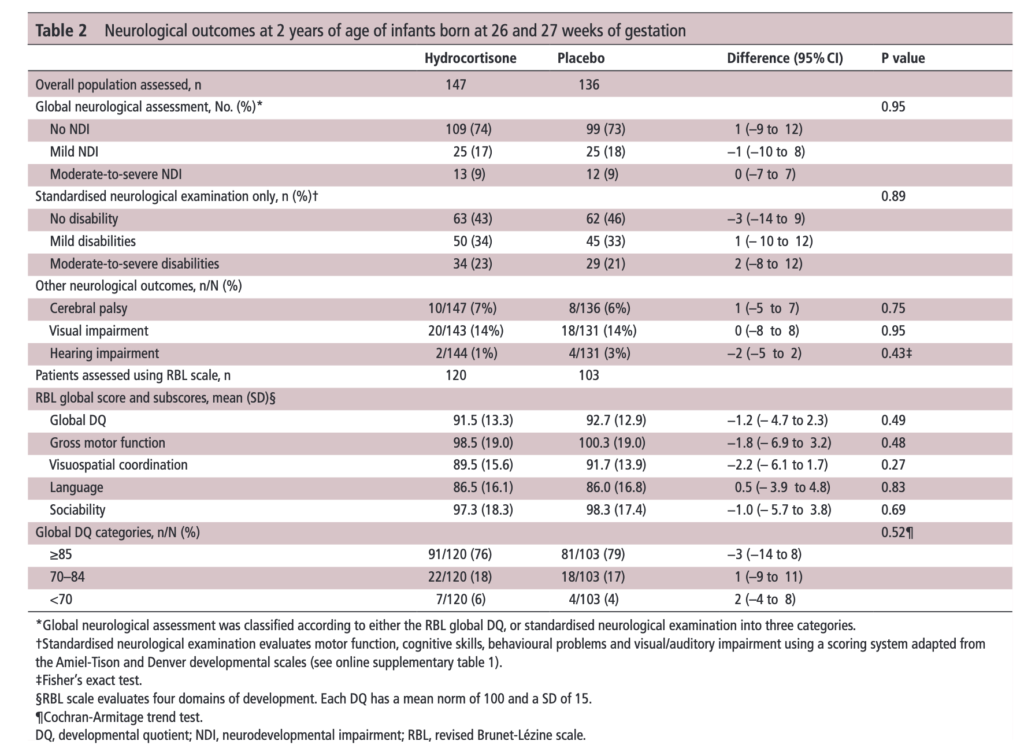 There was no difference in either neurodevelopment overall or any of the subcategories.  This provides a great deal of reassurance to those who provide steroids this way.  There will be those however that argue the study is too small.  While a larger study might be better able to address whether there is a small difference in outcome I don’t think we will see one anytime soon.  It is one of the challenges we face in Neonatology.  Unlike the adult world with studies of thousands of patients, due to the small number of patients born at <28 weeks it is always a challenge to recruit into such large volume trials.  We can compare trials by doing meta analyses or systematic reviews and perhaps that is where we will head with this study although given that different steroids will have been used (thinking dexamethasone as in the DART study) this will always be left open to question.

I suppose the real question here is the following for a parent to consider. “Would you like your baby to receive hydrocortisone shortly after birth with a 7% reduction in the risk of BPD at 36 weeks bearing in mind that although we don’t think there is an impact on long term development we aren’t certain yet”.

I guess to answer this question you need to think about the first part of the question.  Is BPD at 36 weeks a good outcome to look at for benefit?  The Canadian Neonatal Network has recently called for a rethink on this The New BPD That Matters.  It turns out that it is 40 weeks and not 36 weeks that has the greatest prediction for respiratory morbidity after discharge.  If you were to move the goal post to 40 weeks from 36 I strongly suspect one would see the 9% reduction in BPD as shown in the PREMILOC trial vanish.  If that is the case, would a slightly earlier extubation time be enough to motivate families to take the plunge?

Although I often cringe at the expression “more trials are needed”, I think at least a combination of studies to achieve greater confidence in outcome may be needed.  Barring that, we might just have to sit tight and accept that while there may be a little bit to be gained with the use of the PREMILOC protocol it may just not be enough to be clinically warranted at this time.  May want to wait for the next big thing to tackle BPD…