How long should we treat preterm infants with caffeine? 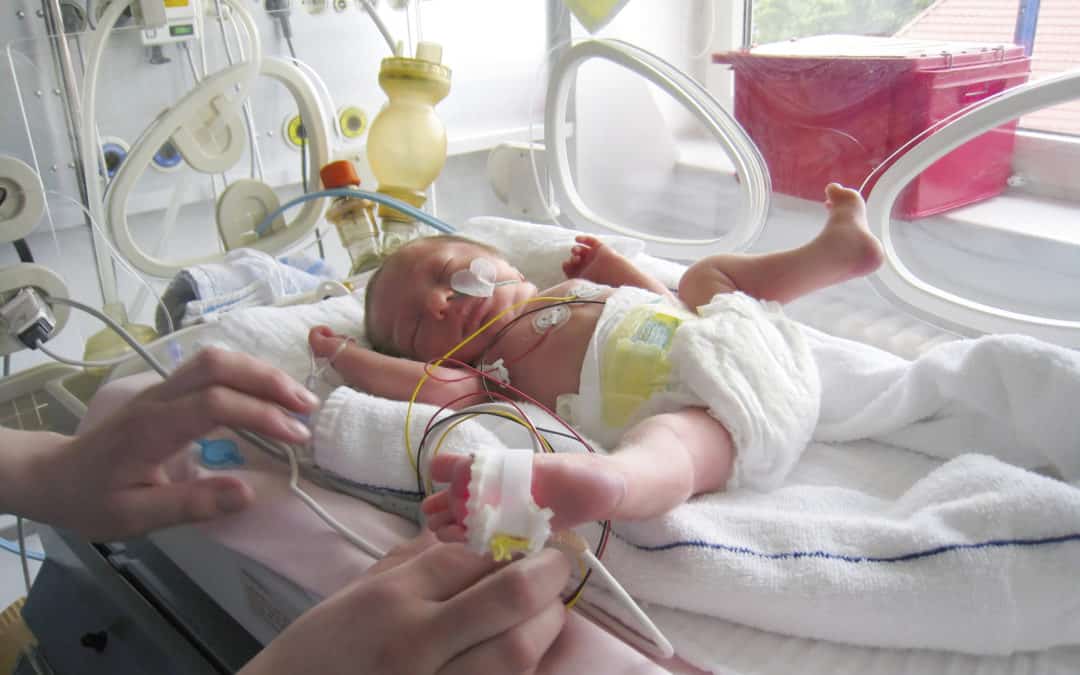 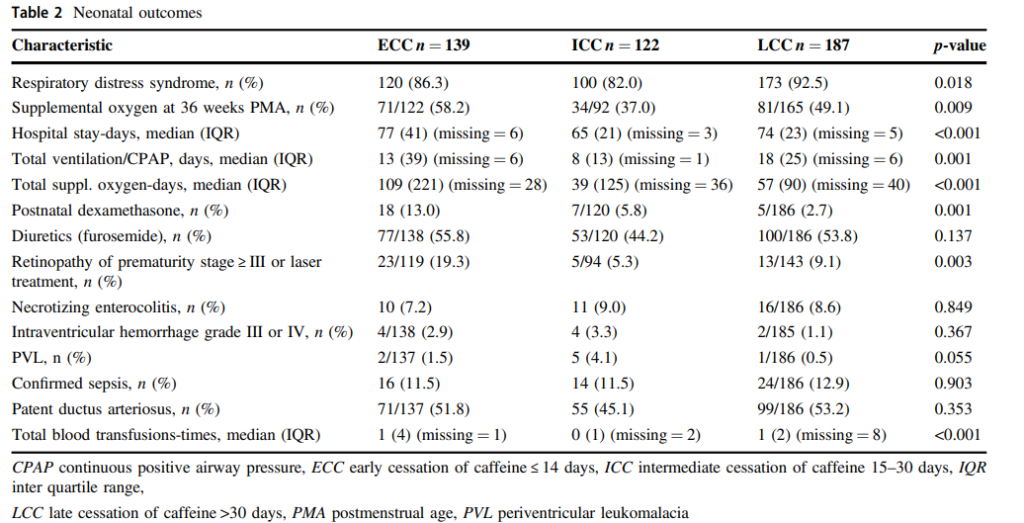 Much has been written about methylxanthines over the years with the main questions initially being, “should we use them?”, “how big a dose should we use” and of course “theophylline vs caffeine”. At least in our units and in most others I know of caffeine seems to reign supreme and while there remains some discussion about whether dosing for maintenance of 2.5 -5 mg/kg/d of caffeine base or 5 – 10 mg/kg/d is the right way to go I think most favour the lower dose. We also know from the CAP study that not only does caffeine work to treat apnea of prematurity but it also appears to reduce the risk of BPD, PDA and duration of oxygen therapy to name a few benefits. Although initially promising as providing a benefit by improving neurodevelopmental outcomes in those who received it, by 5 and 11 years these benefits seem to disappear with only mild motor differences being seen.

Turning to a new question

The new query though is how long to treat? Many units will typically stop caffeine somewhere between 33-35 weeks PMA on the grounds that most babies by then should have outgrown their irregular respiration patterns and have enough pulmonary reserve to withstand a little periodic breathing. Certainly there are those who prove that they truly still need their caffeine and on occasion I have sent some babies home with caffeine when they are fully fed and otherwise able to go home but just can’t seem to stabilize their breathing enough to be off a monitor without caffeine. Then there is also more recent data suggesting that due to intermittent hypoxic episodes in the smallest of infants at term equivalent age, a longer duration of therapy might be advisable for these ELBWs. What really hasn’t been looked at well though is what duration of caffeine might be associated with the best neurodevelopmental outcomes. While I would love to see a prospective study to tackle this question for now we will have to do with one that while retrospective does an admirable job of searching for an answer.

The Calgary Neonatal Group May Have The Answer

Lodha A et al recently published the paper Does duration of caffeine therapy in preterm infants born ≤1250 g at birth influence neurodevelopmental (ND) outcomes at 3 years of
age? This retrospective study looked at infants under 1250g at birth who were treated within one week of age with caffeine and divided them into three categories based on duration of caffeine therapy. The groups were as follows, early cessation of caffeine ≤ 14 days (ECC), intermediate cessation of caffeine 15–30 days (ICC), and late cessation of
caffeine >30 days (LCC).  In total there were 508 eligible infants with 448 (88%)  seen at 3 years CA at follow-up. ECC (n = 139), ICC (n = 122) and LCC (n = 187).  The primary outcome here was ND at 3 years of age while a host of secondary outcomes were also examined such as RDS, PDA, BPD, ROP as typical morbidities.  It made sense to look at these since provision of caffeine had previously been shown to modify such outcomes.

Did they find a benefit?

Sadly there did not appear to be any benefit regardless of which group infants fell in with respect to duration of caffeine when it came to ND.

When looking at secondary

outcomes there were a few key differences found which favoured the ICC group.  These infants had the lowest days of supplemental oxygen, hospital stay ROP and total days of ventilation.  This middle group also had a median GA 1 week older at 27 weeks than the other two groups.  The authors however did a logistic regression and ruled out the improvement based on the advanced GA.  The group with the lowest use of caffeine had higher number of days on supplemental oxygen and higher days of ventilation on average than the middle but not the high caffeine group.  It is tempting to blame the result for the longer caffeine group on these being babies that were just sicker and therefore needed caffeine longer.  On the other hand the babies that were treated with caffeine for less than two weeks appear to have likely needed it longer as they needed longer durations of oxygen and were ventilated longer so perhaps were under treated. What is fair to say though is that the short and long groups having longer median days of ventilation were more likey to have morbidities associated with that being worse ROP and need for O2.  In short they likely had more lung damage.  What is really puzzling to me is that with a median GA of 27-28 weeks some of these kids were off caffeine before 30 weeks PMA and in the middle group for the most part before 32 weeks!  If they were in need of O2 and ventilation for at least two weeks maybe they needed more caffeine or perhaps the babies in these groups were just less sick?

There is another potential answer to why the middle group did the best.  In the methods section the authors acknowledge that for each infant caffeine was loaded at 10 mg/kg/d.  What we don’t know though is what the cumulative dose was for the different groups.  The range of dosing was from 2.5-5 mg/kg/d for maintenance.  Lets say there was an over representation of babies on 2.5 mg/kg/d in the short and long duration groups compared to the middle group.  Could this actually be the reason behind the difference in outcomes?  If for example the dosing on average was lower in these two groups might it be that with less respiratory drive the babies in those groups needed faster ventilator rates with longer durations of support leading to more lung damage and with it the rest of the morbidities that followed?

It would be interesting to see such data to determine if the two groups were indeed dosed on average lower by looking at median doses and total cumulative doses including miniloads along the way.  We know that duration may need to be prolonged in some patients but we also know that dose matters and without knowing this piece of information it is tough to come to a conclusion about how long exactly to treat.

What this study does though is beg for a prospective study to determine when one should stop caffeine as that answer eludes us!