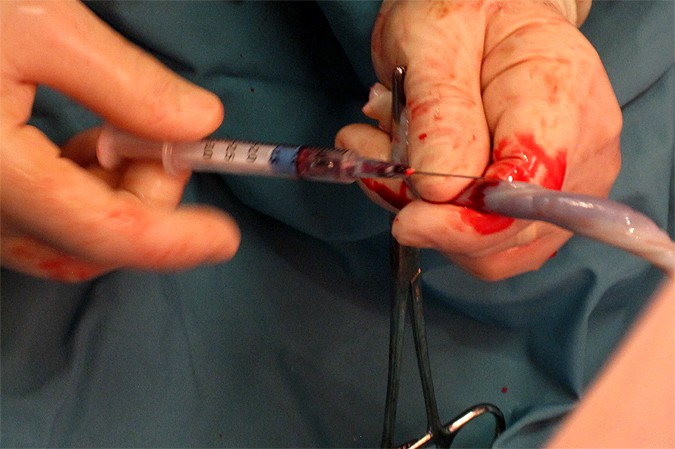 It has to be one of the most common questions you will hear uttered in the NICU.  What were the cord gases?  You have a sick infant in front of you and because we are human and like everything to fit into a nicely packaged box we feel a sense of relief when we are told the cord gases are indeed poor.  The congruence fits with our expectation and that makes us feel as if we understand how this baby in front of us looks the way they do.

Take the following case though and think about how you feel after reading it.  A term infant is born after fetal distress (late deceleration to as low as 50 BPM) is noted on the fetal monitor.  The infant is born flat with no heart rate and after five minutes one is detected.  By this point the infant has received chest compressions and epinephrine twice via the endotracheal tube.  The cord gases are run as the baby is heading off to the NICU for admission and low and behold you get the following results back; pH 7.21, pCO2 61, HCO3 23, lactate 3.5.   You find yourself looking at the infant and scratching your head wondering how the baby in front of you that has left you moist with perspiration looks as bad as they do when the tried and true cord gas seems to be betraying you.  To make matters worse at one hour of age you get the following result back; pH 6.99, pCO2 55, HCO3 5, lactate 15.  Which do you believe?  Is there something wrong with the blood gas analyzer?

How Common Is This Situation

You seem to have an asphyxiated infant but the cord gas isn’t following what you expect as shouldn’t it be low due to the fetal distress that was clearly present?  It turns out, a normal or mildly abnormal cord gas may be found in asphyxiated infants just as commonly as what you might expect.  In 2012 Yeh P et al looked at this issue in their paper The relationship between umbilical cord arterial pH and serious adverse neonatal outcome: analysis of 51,519 consecutive validated samples. The authors sampled a very large number of babies over a near 20 year period to come up with a sample of 51519 babies and sought to pair the results with what they knew of the outcome for each baby.

This is where things get interesting.  When looking at the outcome of encephalopathy with seizures and/or death you will note that only 21.71% of the babies with this outcome had a gas under 7.00.  If you include those under 7.10 as still being significantly distressed then this percentage rises to 34.21%.  In other words almost 66% of babies who have HIE with seizures and/or death have a arterial cord pH above 7.1!  The authors did not look at encephalopathy without seizures but these are the worst infants and almost 2/3 have a cord gas that you wouldn’t much as glance at and say “looks fine”

How do we reconcile this?

The answer lies in the fetal circulation.  When an fetus is severely stressed, anaerobic metabolism takes over and produces lactic acid and the metabolic acidosis that we come to expect.  For the metabolites to get to the umbilcal artery they must leave the fetal tissues and enter the circulation.  If the flow of blood through these tissues is quite poor in the setting of compromised myocardial contractility the acids sit in the tissues.  The blood that is therefore sitting in the cord at the time of sampling actually represents blood that was sent to the placenta “when times were good”.  When the baby is delivered and we do our job of resuscitating the circulation that is restored then drives the lactic acid into the blood stream and consumes the buffering HCO3 leading to the more typical gases we are accustomed to seeing and reestablishing the congruence our brains so desire.  This in fact forms the basis for most HIE protocols which includes a requirement of a cord gas OR arterial blood gas in the first hour of life with a pH < 7.00.

Acidosis May Be Good For the Fetus

To bend your mind just a little further, animal evidence suggests that those fetuses who develop acidosis may benefit from the same and be at an advantage over those infants who don’t get acidemia.  Laptook AR et al published Effects of lactic acid infusions and pH on cerebral blood flow and metabolism.  In this study of piglets, infusion of lactic acid improved cerebral blood flow.  I would suggest improvement in cerebral blood flow of the stressed fetus would be a good thing.  Additionally we know that lactate may be used by the fetus as additional metabolic fuel for the brain which under stress would be another benefit.  Finally the acidemic fetus is able to offload O2 to the tissues via the Bohr effect.  In case you have forgotten this phenomenon, it is the tendency for oxygen to more readily sever its tie to hemoglobin and move into the tissues.

I hope you have found this as interesting as I have in writing it.  The next time you see a good cord gas in a depressed infant, pause for a few seconds and ask yourself is this really a good or a bad thing?