InSurE (Intubate, Surfactant, Extubate) has been the standard approach for some time when it comes to treating RDS.  Less Invasive Surfactant Administration (LISA) or Minimally Invasive Surfactant Administration (MIST) have been growing in popularity as an alternative technique.  More than just popular, the techniques have been shown to reduce some important short term and possibly long term outcomes when used instead of the InSurE approach.  Aldana-Aquirre et al published the most recent systematic review on the topic in  Less invasive surfactant administration versus intubation for surfactant delivery in preterm infants with respiratory distress syndrome: a systematic review and meta-analysis. They demonstrated that when looking at 6 RCTs with 895 infants, the overall results indicate that use of LISA instead of InSurE leads to a lower rate of death or bronchopulmonary dysplasia (BPD) at 36 weeks (risk ratio (RR)=0.75 (95% CI 0.59 to 0.94), p=0.01) and the need for mechanical ventilation within 72 hours of birth (RR=0.71 (0.53 to 0.96), p=0.02) or anytime during the patient stay in the NICU (RR=0.66 (0.47 to 0.93), p=0.02).  This study has been out for two years this month and yet here we are at least in my centre still performing InSurE.

One reason likely has something to do with the expression “you can’t teach an old dog new tricks”.  We know how to do InSurE and we are pretty good at it.  Performing the LISA technique is not just about putting a catheter in the airway and instilling surfactant.  There are several steps that need to be done in order to ensure that the surfactant goes where it is supposed to so there is training required but such training is available in videos posted on the internet or I am sure available from centres willing to share their methods.  Still it takes someone declaring we need to change before anything will happen.  The second reason for this insistence on the status quo has been the availability of only a large volume surfactant in Canada at 5 ml/kg while in European centres the volume administered was half that.  Now a low volume surfactant is available in Canada but some centres have been slow to make a switch due to comfort with the current product.  The drawback to the current product is the concern that you can’t use it for LISA techniques since the centres practicing this technique use the low volume form.

Can High Volume Be Used For Lisa?

Researchers in London, Ontario performed a retrospective cohort study of 43 infants in their institution who underwent the MIST approach for surfactant administration in their study High-volume surfactant administration using a minimally invasive technique: Experience from a Canadian Neonatal Intensive Care Unit. In 2016, London instituted a change in practice to provide MIST for infants born at ≥28 weeks and/or with a birth weight ≥ 1,000 g with respiratory distress syndrome.  Surfactant was provided over 1-3 minutes via a MAC catheter guided through the vocal cords with Magill forceps.  What I like about this study is the reproducibility of it as the authors describe very nicely how the steps were done.   What I also appreciate is the provision of sucrose and atropine prior to the procedure.  Not a rapid sequence induction but it does do something to address the risk of bradycardia and discomfort with cannulation of the trachea.  The results I think speak for themselves that this is indeed possible as 41/43 neonates underwent the procedure with successful instillation of surfactant confirmed by absence of recovered surfactant in aspirated stomach contents. 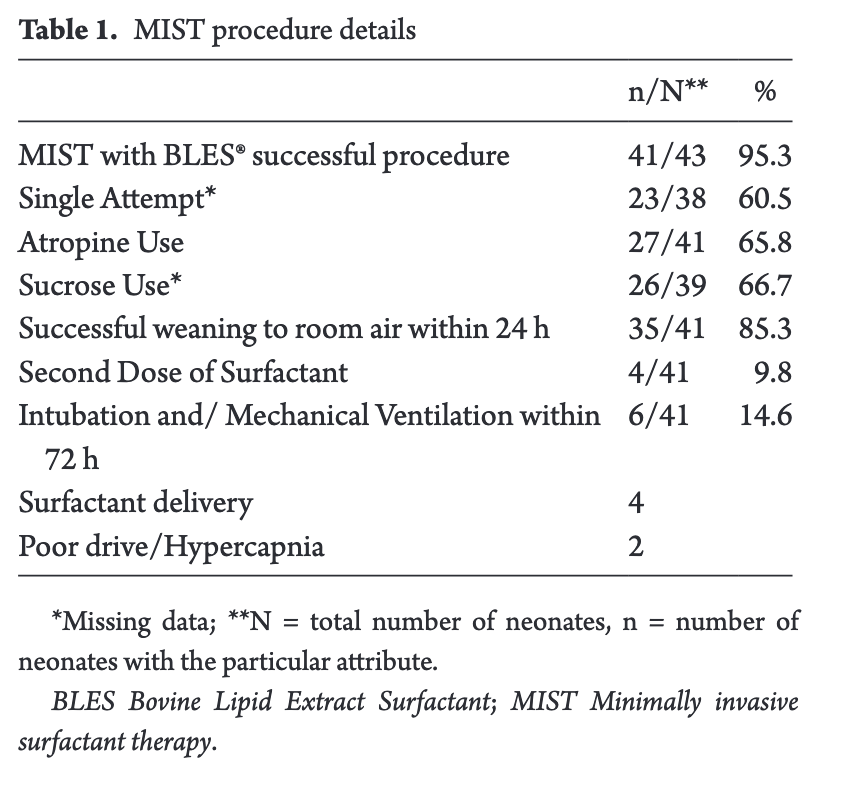 All of these infants qualified for BLES based on an oxygen requirement on non-invasive support of 40% or more.  These patients are similar to our own in Winnipeg in terms of qualifying criteria for surfactant but perhaps a little higher tolerance of FiO2 before intubating.  Additional evidence that surfactant was indeed received was the reduction to room air in 85% of patients within 24 hours and also the need for a second dose of surfactant in only 10%.

Aside from oxygen desaturation in about 50% during BLES administration the adverse effects were fairly limited and similar to what one would see with InSurE.

BLES can be administed via MIST despite concerns about the higher volume of surfactant.  What many centres need to address I suspect is that while we think we are practicing InSurE, in many cases we are not.  The goal of that procedure is to provide the surfactant over a few seconds and then get the ETT out right away.  How often does that happen though in reality?  Have you ever found yourself leaving the ETT in till the baby gets to NICU and extubating there?  Seems safer right?  What if in the elevator or hallway on the way to NICU the baby deteriorates and needs intubation?  How long does the ETT stay in? Twenty minutes, 30, 45, 60 or longer?  Thinking about that in a different way, what does that translate into in terms of number of PPV breaths?  Well at a rate of 60 breaths a minute that means 1800,  2700, 3600 and more breaths before the ETT is removed.  I have often wondered if this in itself explains why InSurE seems to be repeatedly identified as being inferior to MIST.  If you intubated, gave the surfactant and pulled the ETT out right away in all cases might the two techniques actually be equivalent.

The question now really is how do we get past our tendencies and embrace a change in practice that by design will not allow us to delivery any positive pressure breaths?!