What is Respiratory Distress Syndrome & How Do We Treat It? 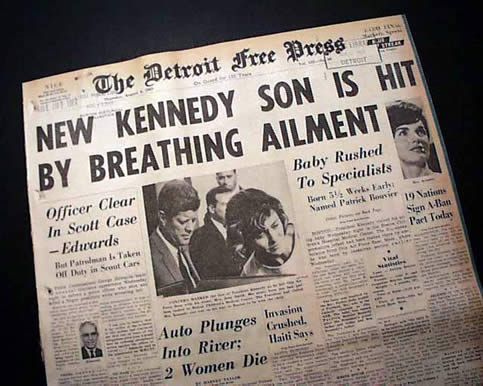 If you are reading this and have a baby in the NICU with respiratory distress syndrome (RDS) otherwise known as hyaline membrane disease you might be surprised to know that it is because of the same condition that modern NICUs exist. The newspaper clipping from above sparked a multibillion dollar expansion of research to find a cure for the condition that took the life of President Kennedy’s preterm infant Patrick Bouvier Kennedy. He died of complications of RDS as there was nothing other than oxygen to treat him with. After his death the President committeed dollars to research to find a treatment and from that came surfactant and modern ventilators to support these little ones.

What is surfactant and what is it’s relationship to RDS?

When you take a breath (all of us including you reading this) oxygen travels down your windpipe (trachea) down into your lung and goes left and right down what are called your mainstem bronchi and then travels to the deep parts of the lung eventually finding its way to your tiny air sacs called alveoli (there are millions of them). Each alveolus has a substance in it called surfactant which helps to reduce the surface tension in the sac allowing it to open to receive oxygen and then shrink to get rid of carbon dioxide that the blood stream brings to these sacs to eliminate. Preterm infants don’t have enough surfactant and therefore the tension is high and the sacs are hard to open and easily collapse. Think of surface tension like blowing up those latex balloons as a child. Very hard to get them started but once those little balloons open a little it is much easier! The x-ray above shows you what the lungs of a newborn with RDS look like. They are described as having a “ground glass” appearance which if you recall is the white glass that you write on using a grease pencil when you are using a microscope slide. Remember that?

Before your infant was born you may have received two needles in your buttocks. These needles contain steroid that helps your unborn baby make surfactant so that when they are born they have a better chance of breathing on their own.

Things we can do after birth

Even with steroids the lungs may be “sticky” after birth and difficult to open. The way this will look to you is that when your baby takes a breath since it is so difficult the skin in between the ribs may seem to suck in. That is because the lungs are working so hard to take breath in that the negative pressure is seen on the chest. If your baby is doing that we can start them on something called CPAP which is a machine that uses a mask covering the nose and blows air into the chest. This air is under pressure and helps get oxygen into the lungs and gives them the assist they need to overcome the resistance to opening.

Some babies need more than this though and will need surfactant put into the lungs. The way this is done is typically by one of two ways. One option is to put a plastic tube in between the vocal cords and then squirt in surfactant (we get it from cow’s or pigs) and then typically the tube is withdrawn (you may hear people call it the INSURE technique – INtubate, SURfactant, Extubate). For some babies who still need oxygen after the tube is put in they may need to remain on the ventilator to help them breathe for awhile. The other technique is the LISA (Less Invasive Surfactant Administration). This is a newer way of giving surfactant and typically involves putting a baby on CPAP and then looking at the vocal cords and putting a thin catheter in between them. Surfactant is then squirted into the trachea and the catheter taken out. The difference between the two methods is that in the LISA method your baby is breathing on their own throughout the procedure while receiving CPAP.

Even if no surfactant is given the good news is that while RDS typically worsens over the first 2-3 days, by day 3-4 your baby will start to make their own surfactant. When that happens they will start to feel better and breathe easier. Come to think of it you will too.