After Trump won in 2016 where did all the male babies go? 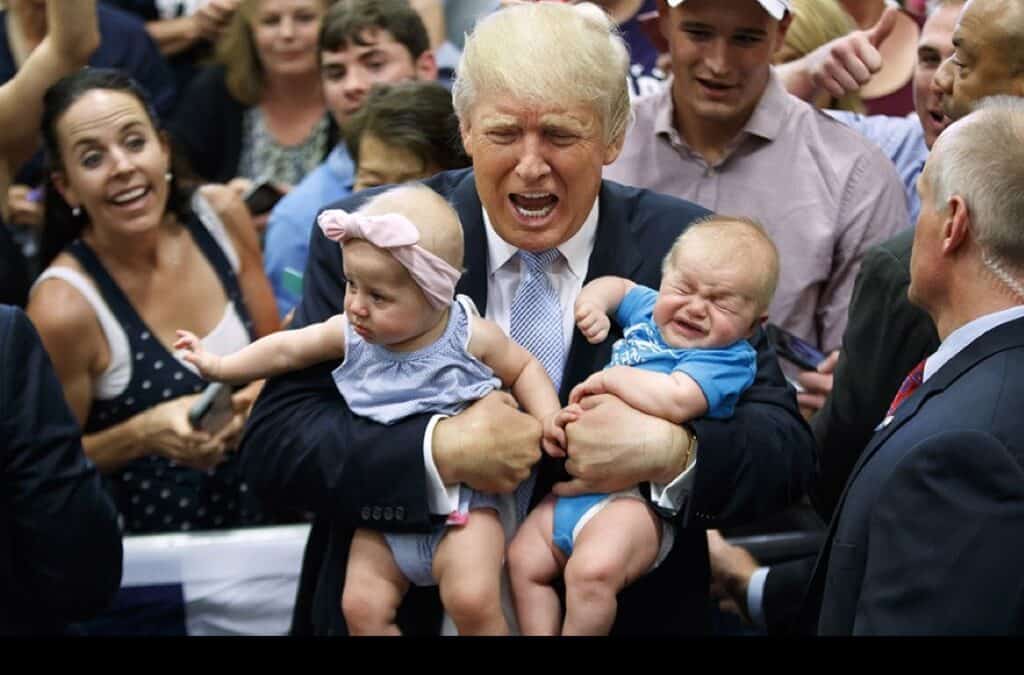 As the familiar saying goes, “when the U.S sneezes Canada catches a cold”. This post will be the most political one I have ever written I suppose but before I get too far into it let me say that I do not intend to write a pro or con piece about the President of the United States. What I do intend is to alert you all to a very interesting trend that occurred in the months following the election in November 2016 of Donald Trump.

It is fair to say that the election provided the US with a right leaning president and also fair to say that in Ontario the political leanings tend to be more to the middle or left of centre. When you have that disparity it could lead to stress in such left leaning areas of the Province as people would begin to worry about the impact of right leaning policies on their fortunes. Prior work had noted that in times of significant stress the ratio of male to female births can be affected. Interestingly on average there are almost always slightly more males born than females. Many theories abound as to why this might be with one theory being that we males fetuses tend to be more fragile (some women would say this is for life) so we need more of us to start in order to balance the population out. As seen in global catastrophes such as war this ratio can move closer to 1:1 for a period of a few months after the significant event but then recovers a few months later.

Outcome of the 2016 United States presidential election and the subsequent sex ratio at birth in Canada: an ecological study was published this year by Retnakaran and Yi using the Better Outcomes Registry & Network (BORN) in Ontario to capture data on birth ratios from 2010 to 2017. The authors were able to control for birth seasonality and looked at the change in birth ratio in left leaning health regions in particular between the months leading up to the election in November 2016 and then the 12 months afterwards. Their findings I found fascinating and like much research probably creates further questions. As has been seen in other situations like this a trough in the ratio occurred about 5 months after the election. A gradual but consistent increase in the ratio back to baseline came about close to 6 months later. This effect is seen in the figure below demonstrating that on the far right of the graph recovery was brisk and unidirectional. In the end it would appear that much like previous psychologically dramatic situations the impact in Ontario with a markedly different political viewpoint than their neighbours to the south had a similar effect.

Perhaps equally interesting is what happened in right leaning health regions with respect to birth ratio. No increase in ratio was seen in the months after the election. The trend was really reversed as shown below.

The Next Question is Why and How?

The answer to this question is likely a sad one that at this point is speculative. Five months after the election the die was cast so to speak as women were already pregnant so the answer cannot be that people were having less pregnancies or selecting out female fetuses through IVF. The most likely answer is that there was an disproportionate loss of male fetuses after this political moment in history. We teach often in medicine that the female sex is the stronger one and it is for this reason that in times of trauma the male fetuses might be expected to be lost in a higher frequency than female.

I can’t help but think if people knew of this phenomenon and could anticipate that it could happen that an opportunity for intervention would exist. Maybe the next time an election involves such polarizing candidates (such as now) part of the antenatal visit could be reminding families about programs for grief counseling or help with stress relief. I have to confess I had no idea this phenomenon existed but I must confess I am sold that it is real and if fetal loss is a risk there is something that we can do before the next US election and help maybe save a few lives along the way.