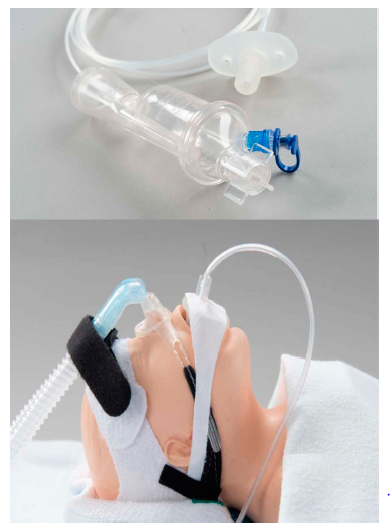 Surfactant administration is a frequent topic on this blog and as I look over the last five years there has been an evolution with its administration from InSure to LISA/MIST and even pharyngeal surfactant through an LMA. We have also discussed aerosolization of surfactant once and now a much larger trial is out that brings this technique which has to be the least invasive into the limelight. What gives me great pleasure is being able to highlight the article here Aerosolized Calfactant for Newborns With Respiratory Distress: A Randomized Trial as the lead author is our CPS Fetus and Newborn Committee American of Pediatrics liaison Dr. James Cummings. Being able to review an article by a colleague and friend I think is always something that gives me some trepidation as what happens if the article is a poor one but in this case I feel pretty safe. The study was done by a large group of investigators known as the AERO-02 group and there are lots of gems to pick apart here.

On to the Study

This trial involving 22 NICUs enrolled Among 457 infants born with a GA from 23 to 41 (median 33) weeks and
birth weight 595 to 4802 (median 1960) grams. In total, 230 infants were randomly assigned to aerosol; 225 received 334 treatments, starting at a median of 5 hours. The study allowed for repeat dosing of aerosolized surfactant up to 3 times with each treatment providing 6 mL/kg of 35 mg/mL calfactant suspension, 210 mg phospholipids/kg body weight, through a modified Solarys nebulizer shown below. The delivery device was like an inverted nipple placed in the mouth in order to deliver surfactant while the infant was on non-invasive support (CPAP, hi-flow or NIPPV).

From prior animal studies use of this method is thought to deliver approximately (14%), the surfactant dose used in
or about 29 mg/kg reaching the distal alveolar bed. By allowing up to three treatments in 72 hours (there had to be a reduction in FiO2 with each treatment to allow a further one) the total delivered would be aboout 90 mg/kg although in some likely more and others less depending on depostion amounts. The study originally was planned as two cohorts but since they enrolled all in the first the second one was not used. The first cohort were:

2. had not previously received surfactant,
3. Between 1 hour to 12 hours of
age,

5. Initially, there was an entry requirement FIO2 concentration of 0.25 to 0.40. Four months into the trial, it was discovered that several sites were using higher positive airway pressures to minimize FIO2. Because of this practice change, the minimum FIO2 requirement was removed in the fifth month of the trial

The trial was a pragmatic one where the authors did not specify what criteria were needed to decide when to intubate for surfactant. While this lack of standardization might turn some people off, many trials are headed this way as it represents “real life”. In other trials where you have rigid criteria if your own centre doesn’t typically use them the results of the trial in the end might just not apply. The question then is did this style of trial design in the end find a difference in outcome for the babies randomized to aerosolization or standard care with CPAP, HFNC or NIPPV to avoid intubation?

The trial met its number of patients required in the power calculation to find a difference in outcome. Demographics, receipt of antenatal steroids and levels of respiratory support at baseline were similar between groups. In the aerosol group. 225 infants received 334 treatments at a median age of 5 hours (interquartile range [IQR]: 3–7);149 (66%) received only one aerosol treatment, 43 (19%) received 2 treatments, and 33 (15%) received 3 treatments. It is also important to note that by defining the entry point of 1-12 hours of age, those with severe RDS would not have been enrolled here. Infants with apnea, or severe distress would not have been able to wait the hour time frame for entry and moreover since the aerosolization technique takes about an hour to administer those in need of urgent treatment would not be enrolled. As such we are really talking here about babies with mild to moderate RDS.

The impact of this approach was quite significant. Interestingly you would think that as GA decreased the effectiveness of the intervention would lessen but when the authors groups GA into two week brackets as shown below the only GA bracket that showed no difference in approach was the 23/24 week group. Having said that the numbers are very small on the lower end of GA for the study but again overall the results find a 50% reduction in need for intubation using this technique with the trend (by my eye) being that as GA increases the effectiveness seems to get even better.

The study was not blinded and as such the authors also took the time to look for evidence of bias in the study and found none. The last figure to show is the effect of this intervention on total duration of respiratory support between the two randomized groups. In other words while the use of the technique reduced your likelihood of intubation by 50% it didn’t get you off of non-invasive support any faster in the 72 hours after treatment.

Looking at complication rates between groups there was no difference as well.

I think what has been shown here is that aerosolized surfactant in a real world research model is safe and effective for mild to moderate RDS in reducing the need for intubation. For those infants with more significant RDS or severe apnea they will not be able to make it long enough to get these treatments. For others this does seem like something worth exploring as for those that you were going to commit to a non-invasive approach is there really any harm? There will be those that will fail but overall this data suggests that you could expect a 50% reduction in this occurrence for all your patients with mild to moderate RDS. The one fly in the ointment I see that could influence the effectiveness of this intervention is the level of support you are accustomed to using in your centre. It could be in those centres that are a bit “peepaphobic” and use a maximum of +5 or +6 on CPAP this intervention could be quite effective but in those that are willing to use +7or +8 the rate of intubation or surfactant might well be less. Regardless the intervention appears to be safe, well tolerated and can make a difference. If a delivery device could be prepared that increased deposition rates to even higher levels imagine how effective it just might be.