Healthy at risk infants failing the infant car seat challenge. Cause for concern?

The infant car seat challenge(ICSC) is a test which most definitely fits the definition of a battleground issue in Neonatology.  After publishing the Canadian Pediatric Practice point on the same topic I received interesting feedback through the various social media forums that I frequent.  While some were celebrating the consensus of the statement as verification that a centres’ non practice of the test was acceptable, others seriously questioned the validity of the position.  The naysayers would point out that extremely infrequent events unless intentionally tracked may be difficult to pick up.  In the case of the ICSC, if a few patients were to suffer a hypoxic event leading to an ALTE or worse after discharge, could the ICSC have picked out these babies and prevented the outcome?  The evidence for adverse events associated with the use of car seats as discussed in the position statement is poor when using autopsy records over decades but when many clinicians can point to a failed ICSC picking up events, the thought goes that they “caught one”.  Does catching one make a difference though?

Shah et al in their recent paper Clinical Outcomes Associated with a Failed Infant Car Seat Challenge attempt to address this very point.  They performed a retrospective study of 148 patients who were either <37 weeks GA or < 2500g at birth.  The study was made possible by the fact that all such infants in their hospital admitted to a well newborn area meeting these criteria by policy must have an ICSC prior to discharge.  Keep in mind that these were all infants who were on the well newborn service since they were asymptomatic.  The definition of an event in this group was one or more of pulse oximeter saturation ≤ 85% for > 10 seconds, apnea > 20 seconds, bradycardia < 80 bpm for > 10 seconds, or an apnea or bradycardia event requiring stimulation.  The failure rate was 4.5% which is very similar to other reported studies.

Why did they “fail”?

What is interesting about these results is what happened to these infants after admission to the NICU in that 39% were identified with apnea (48% in preterm vs 17% in term infants).  These events were in the supine position which is a curious finding since the ICSC was designed to find risk of cardiorespiratory stability in a semi-recumbent position.  This has been shown previously though.

What does it all mean?

The infants in this study ultimately had more NG feeding, prolonged length of stay and septic workups after failing the ICSC that comparable infants who passed.  At first blush one would read this article and immediately question the validity of the CPS position but then the real question is what has this added to the “pool of knowledge”.  That infants may fail an ICSC at a rate of 4.5% is already known.  That such infants may demonstrate apneic events has also been shown before and a study like this may help to support those clinicians who feel it is still imperative to find these infants in order to achieve a safe discharge.  I think it is important to put these findings in the context of what would have happened if such a unit did not routinely test these types of babies.  As all were seemingly well and I presume feeding with their families, they would have been discharged after 24-48 hours to home.  We have no evidence (since they have not compared this sample to a group who did not have such testing) that if these babies were discharged they would have faired poorly.

The supporters of the ICSC would point to all the support these babies received by admitting them for 6-8 days, providing NG feeding and ruling out sepsis that they were unsafe for discharge.  The other possible way to look at it was that the infants were subjected to interventions that we have no evidence helped them.  Whether any of these infants had a positive blood culture justifying antibiotics or needed methylxanthine support is not mentioned.  Judging however by the short length of stay I suspect that none or few of these infants needed such medication as I would expect they would have stayed much longer had they needed medical treatment for apnea.

I do commend the authors for completing the study and while it does raise some eyebrows, I don’t see it changing at least my position on the ICSC.  While they have described a cohort of patients who failed the ICSC nicely, the fundamental question has been left unanswered.  Does any of this matter?  If you look well, are feeding well and free of any clinically recognizable events but are late preterm or IUGR can the ICSC prevent harm?  This has not been answered here and perhaps the next step would be for a centre that has abandoned the ICSC to follow their patients after discharge prospectively and see whether any adverse outcomes do indeed occur.  Any takers? 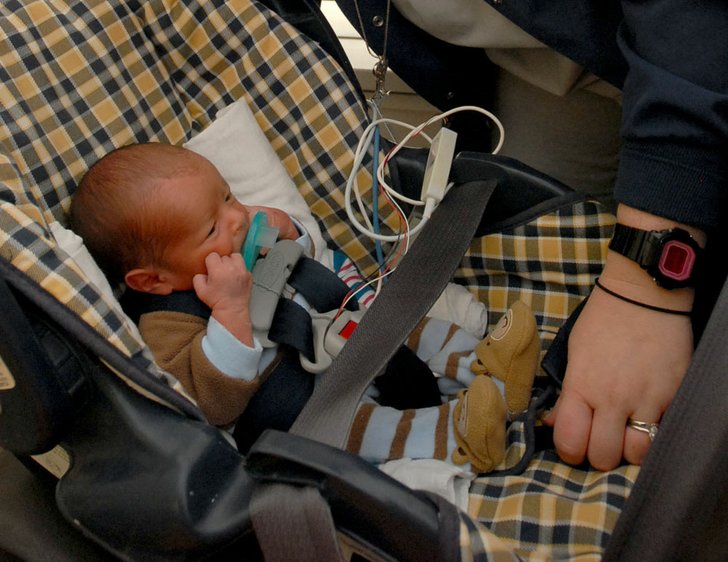 Is the Car Seat Test Still Alive And Well?

It has been almost a year since the CPS released the new statement on car seat testing prior to discharge.  As both the author and a person with a personal bias I am deeply curious what impact the change in position has had on the community out there.  My question to you the reader is whether the statement had any influence on your local practice.  Now if you are in the US I know the answer already should be a resounding no as you are still likely to follow the recommendation of the AAP.  What about the rest and in particular those that read the CPS guidelines.

The day has finally come that the CPS has released a new statement on Infant Car Seat Testing.  While I am the author of the statement and this may sound like self promotion, I am putting it here as there are many followers across Canada and elsewhere who may see this change in position here but not through the CPS distribution network.

This is an important statement not because I wrote it but due to the state of testing in Canada.  Through personal communications it is apparent that the test has fallen out of favour in some jurisdictions in Canada while others have been steadfast in a pass of the test as a criterion for discharge.

As you will see, the Fetus and Newborn Committee have created a clear recommendation on this test which represents a significant departure from the previous position.

How will your centre respond to this change?  I would welcome feedback on this from readers and am interested to see if the AAP will follow suit sometime in the future.

For the complete statement please see:

For a link to the rest of the Fetus and Newborn Statements please click here.