Cord milking and IVH. What you need to know.

Delayed cord clamping has been written about before on this blog. In fact between the blog and facebook posts I think it has been discussed many times. What hasn’t really been touched upon whether one type of cord management is superior to another. Is delayed cord clamping equivalent to cord milking or is one better than the other? The answer is a complicated one as you first need to define what both are. For delayed cord clamping it could be as short as 3 minutes and as long as 5 minutes or so as was seen in the post on physiological based cord clamping. For cord milking I suppose the definition is a little less broad but typically involves stripping of the cord after allowing the cord to fill with placental blood to enhance flow over a shorter time than DCC from the placenta to the newborn.

A Head to Head Comparison

Katheria A et al published Association of Umbilical Cord Milking vs Delayed Umbilical Cord Clamping With Death or Severe Intraventricular Hemorrhage Among Preterm Infants this past month in JAMA. The authors compared two well defined approaches to care after delivery. Delayed cord clamping was defined as being at least 60 seconds (mean time was about that) while cord milking was done by using 20 cm of the umbilical cord and milking for 2 seconds allowing refill, and then repeating 3 more times. The primary outcome under study was the incidence of death or severe IVH at 6 month’s corrected gestational age. The goal was to enroll 502 per group based on their power calculation. Furthermore the study design included randomization into two strata of 23 weeks 0 days to 27 weeks and 6 days and 28 weeks o days to 31 weeks 6 days. They managed to enroll 474 infants and in each arm there was good compliance with the allocated intervention (98% for cord milking and 93% for delayed cord clamping. What makes the study interesting though is that it was stopped by the data safety monitoring board after 236 were enrolled in the cord milking group and 238 in the delayed arm.

There were no significant differences between the maternal and neonatal demographics between groups. The mean time to clamping in the delayed group was 57.5 seconds compared to 22.8 seconds in the cord milking arm. The primary outcome at this point showed no difference between groups. What was concerning though was the pre-planned secondary outcome of severe intraventricular bleeding alone and is shown below.

The incidence of death from the above table was no different but in the group of infants between 23+0 and 27 +6 weeks there was a finding of 22% with severe IVH compared to only 6% in the delayed cord clamping group. This finding was understandably enough to shut down the study from enrolling further patients.

Why could this have happened?

I suppose we don’t know for sure but one of the benefits of writing a blog is that I get to speculate! The cerebral vasculature of small infants is quite fragile and furthermore is very poor at autoregulating its circulation. With cord milking I imagine it is similar to small boluses of blood. In a small preterm infant it may be that the baby is unable to limit the flow of blood adequately into the cerebral circulation leading to acute bleeding. Contrast this with the slow trickle of blood that one gets over a minute while the cord is not clamped.

This study is going to be a tough one to get past I suspect for those centres grappling with whether cord milking or delayed cord clamping in the best strategy. The question I think really these days should not be between these two but rather as I have written about before, how long should a delay in clamping really be? One minute is likely far too short while 5 minutes probably too long for most to be comfortable. I suspect the 2-3 minute range is where things will settle out. Additionally, strategies to allow resuscitation with an intact cord can and should be explored as those who are most sick at birth are likely the ones who could most benefit from a delay in clamping. More research is needed and I suspect you will hear about some before long on this site! 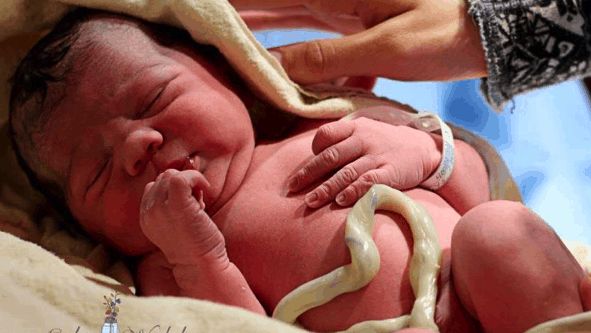 How long should delayed cord clamping really be?

The story around cord management after birth continues to be an evolving one. I have certainly posted my own thoughts on this before with my most recent post being Delayed cord clamping may get replaced. Time for physiological based cord clamping. While this piece demonstrated that there are benefits to longer times till clamping is done, it also showed that if you go too long hypothermia becomes a real risk and with it possible complications. At least in our centre the standard that we have tried to reach is DCC for one minute for our infants. As you will no doubt know from the literature reviewed here before, this is likely not long enough!

One or Three Minutes?

This study caught my eye this week. Effect of early versus delayed cord clamping in neonate on heart rate, breathing and oxygen saturation during first 10 minutes of birth – randomized clinical trial What struck me in particular about this paper was not just the physiologic outcomes it was looking at. What is remarkable is the size of the study. So many articles that are published in Neonatology have under a hundred patients. On occasion we see studies with hundreds. In this case the authors included 1510 patients who were randomized to early ≤60 s of birth and ≥ 180 s for time of clamping. What is also interesting here is that early which used to be considered right after delivery of the infant is now 1 minute in this study. I like that this is the accepted new norm for this type of study.

A longer time on “heart lung bypass” from the placenta should allow for a smoother transition. That is what was seen here. At 1, 5 and 10 minutes infants randomized to the DCC had better oxygen saturations. Heart rates interestingly were lower in the DCC group but that could also be related to better oxygenation leading to less compensatory tachycardia. In other studies in which the cord was clamped immediately bradycardia was more common. This difference here may reflect timing of the clamp on heart rate. Lastly, time to first breath was much faster in the group randomized to DCC. Might this be an effect of better oxygenation?

What they didn’t measure?

There was no comment on risk of hypothermia or other markers of illness such as rates of admission to NICU, hypoglycemia, lethargy or other markers of an infant who became cold. If this is to become standard practice measures need to be in place to prevent these concerns from becoming reality. It is also worth noting the population studied. These are healthy late preterm and term pregnancies. More work is needed on younger infants and those with risk factors in pregnancy. How would mothers with poor tracings, diabetes or hypertension fare as well as those who have growth restricted infants?

This field is growing and I will continue to follow this evolving story and share information as it becomes available. One thing in my mind is fairly certain though and that is that clamping right after delivery for routine births should be a thing of the past.