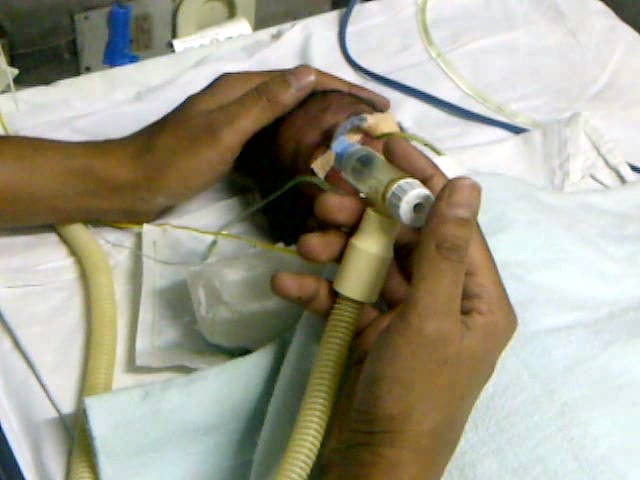 Is expired CO2 the key to making sustained inflation a standard in resuscitation?

We can always learn and we can always do better.  At least that is something that I believe in.  In our approach to resuscitating newborns one simple rule is clear.  Fluid must be replaced by air after birth and the way to oxygenate and remove CO2 is to establish a functional residual capacity.  The functional residual capacity is the volume of air left in the lung after a tidal volume of air is expelled in a spontaneously breathing infant and is shown in the figure. Traditionally, to establish this volume in a newborn who is apneic, you begin PPV or in the spontaneously breathing baby with respiratory distress provide CPAP to help inflate the lungs and establish FRC.

Is there another way?

Something that has been discussed now for some time and was commented on in the most recent version of NRP was the concept of using sustained inflation (SI) to achieve FRC. I have written about this topic previously and came to a conclusion that it wasn’t quite ready for prime time yet in the piece Is It Time To Use Sustained Lung Inflation In NRP?

The conclusion as well in the NRP textbook was the following:

“There are insufficient data regarding short and long-term safety and the most appropriate duration and pressure of inflation to support routine application of sustained inflation of greater than 5 seconds’ duration to the transitioning newborn (Class IIb, LOE B-R). Further studies using carefully designed protocols are needed”

So what now could be causing me to revisit this concept?   I will be frank and admit that whenever I see research out of my old unit in Edmonton I feel compelled to read it and this time was no different.  The Edmonton group continues to do wonderful work in the area of resuscitation and expand the body of literature in such areas as sustained inflation.

Can you predict how much of a sustained inflation is needed?

This is the crux of a recent study using end tidal CO2 measurement to determine whether the lung has indeed established an FRC or not.  Dr. Schmolzer’s group in their paper (Using exhaled CO2 to guide initial respiratory support at birth: a randomised controlled trial) used end tidal CO2 levels above 20 mmHg to indicate that FRC had been established.  If you have less CO2 being released the concept would be that the lung is actually not open.  There are some important numbers in this study that need to be acknowledged.  The first is the population that they looked at which were infants under 32 6/7 weeks and the second is the incidence of BPD (need for O2 or respiratory support at 36 weeks) which in their unit was 49%.  This is a BIG number as in comparison for infants under 1500g our own local incidence is about 11%.  If you were to add larger infants closer to 33 weeks our number would be lower due to dilution.  With such a large number though in Edmonton it allowed them to shoot for a 40% reduction in BPD (50% down to 30%).  To accomplish this they needed 93 infants in each group to show a difference this big.

So what did they do?

For this study they divided the groups in two when the infant wouldn’t breathe in the delivery room.  The SI group received a PIP of 24 using a T-piece resuscitator for an initial 20 seconds.  If the pCO2 as measured by the ETCO2 remained less than 20 they received an additional 10 seconds of SI.  In the PPV group after 30 seconds of PPV the infants received an increase of PIP if pCO2 remained below 20 or a decrease in PIP if above 20.  In both arms after this phase of the study NRP was then followed as per usual guidelines.

The results though just didn’t come through for the primary outcome although ventilation did show a difference.

The reduction in hours of ventilation was impressive although no difference in BPD was seen.  The problem though with all of this is what happened after recruitment into the study.  Although they started with many more patients than they needed, by the end they had only 76 in the SI group and 86 in the PPV group.  Why is this a problem?  If you have less patients than you needed based on the power calculation then you actually didn’t have enough patients enrolled to show a difference.  The additional compounding fact here is that of the Hawthorne Effect. Simply put, patients who are in a study tend to do better by being in a study.  The observed rate of BPD was 33% during the study.  If the observed rate is lower than expected when the power calculation was done it means that the number needed to show a difference was even larger than the amount they originally thought was needed.  In the end they just didn’t have the numbers to show a difference so there isn’t much to conclude.

I have a feeling or a hunch that with a larger sample size there could be something here.  Using end tidal pCO2 to determine if the lung is open is in and of itself I believe a strategy to consider whether giving PPV or one day SI.  We already use colorimetric devices to determine ETT placement but using a quantitative measure to ascertain the extent of open lung seems promising to me.  I for one look forward to the continued work of the Neonatal Resuscitation–Stabilization–Triage team (RST team) and congratulate them on the great work that they continue doing. 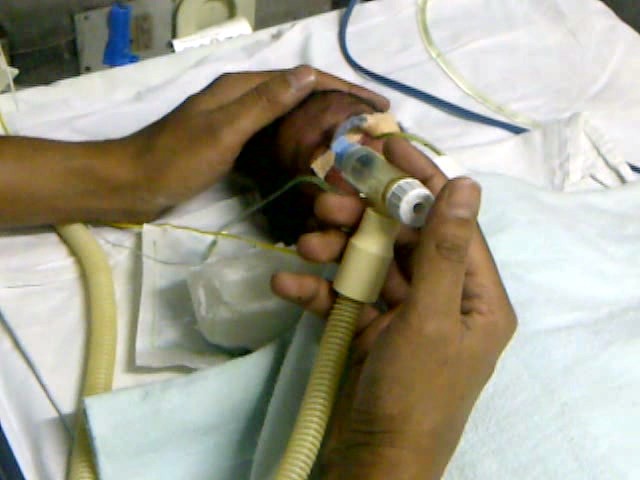 Is It Time To Use Sustained Lung Inflation In NRP?

As I was preparing to settle in tonight I received a question from a reader on my Linkedin page  in regards to the use of sustained inflation (SI) in our units.  We don’t use it and I think the reasons behind it might be of interest to others.  The concept of SI is that by providing a high opening pressure of 20 – 30 cm H2O for anywhere from 5 to 15 seconds one may be able to open the “stiff” lung of a preterm infant with RDS and establish an adequate functional residual capacity.  Once the lung is open, it may be possible in theory to keep it open with ongoing peep at a more traditional level of 5 – 8 cm of H20.

The concept was tested 25 years ago by Vyas et al in their article Physiologic responses to prolonged and slow-rise inflation in the resuscitation of the asphyxiated newborn infant.  In this study, 9 newborn infants were given a relatively short 5 second sustained inflation and led to earlier and larger lung volumes with good establishment of FRC.  Like many trials in Neonatology though sceptics abound and here we are 25 years later still discussing the merits of this approach.

As I have a warm place in my heart for the place that started my professional career whenever I come across a paper published by former colleagues I take a closer look.  Such is the case with a systematic review on sustained inflation by Schmolzer et al.  The inclusion criteria were studies of infants born at <33 weeks. Their article provides a wonderful assessment of the state of the literature on the topic and I would encourage you to have a look at it if you would like a good reference to keep around on the topic.  What it comes down to though is that there are really only four randomized human studies using the technique and in truth they are fairly heterogeneous in their design.  They vary in the length of time an SI was performed (5 – 20 seconds), the pressures used (20 – 30 cm H2O), single or multiple SIs and lastly amount of oxygen utilized being 21 – 100%.  In fact three of the four studies used either 100% or in one case 50% FiO2 when providing such treatments.

What Did They Show?

This is where things get interesting.  SI works in the short term by reducing the likelihood that an infant will need mechanical ventilation at 72 hours with a number needed to treat of only 10!  In medicine we normally would embrace such results but sadly the results do not translate into long term benefits as the rate of BPD, mortality and the combined outcome do not remain significant.  Interestingly, the incidence of a symptomatic PDA needing treatment with either a medical or surgical approach had a number needed to harm of 11; an equally impressive number but one that gives reason for concern. 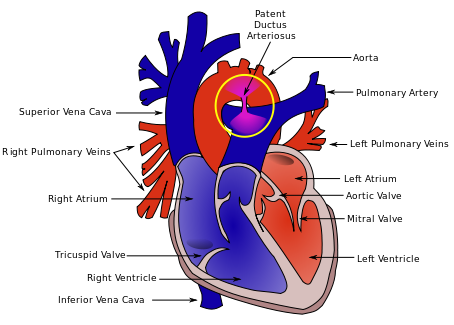 As the authors speculate, the increased rate of PDA may be in fact related to the good job that the SI does in this early phase.  By establishing an open lung and at an earlier time point it may well be that there is an accentuation in the relaxation of the pulmonary vasculature and this leads to a left to right shunt that by being hemodynamically significant helps to stent the ductus open at a time when it might otherwise be tending to close.  This outcome in and of itself raises concern in my mind and is the first reason to give me reason to pause before adopting this practice.

Although non-significant there was a trend towards increased rates of IVH in the groups randomized to SI.  There is real biologic plausibility here.  During an SI the increased positive pressure in the chest could well simulate a similar effect to a pneumothorax and impede the passive drainage of blood from the head into the thorax.  In particular, longer durations and/or frequent SIs could increase such risk.  Given the heterogeneous nature of these studies it is difficult to know if they all had been similar in providing multiple SIs could we have seen this cross over to significant?

I believe the biggest concern in all of this though is that I would have a very hard time applying the results of these studies to our patient population.  The systematic review addresses the question about whether SI is better than IPPV as a lung recruitment strategy in the preterm infant with respiratory distress.  I have to say though we have moved beyond IPPV as an initial strategy in favour of placement of CPAP on the infant directly after birth.  The real question in my mind is whether providing brief periods of SI followed by CPAP of +6 to +8 is better than placement on CPAP alone as a first strategy to establish good lung volumes.

If I am to be swayed by the use of SI someone needs to do this study first.  The possibility of increasing the number of hemodynamically significant PDAs and potentially worsening IVH without any clear reduction in BPD is definitely placing me firmly in the camp of favouring the CPAP approach.  Having said all that, the work by the Edmonton group is important and gives everyone a glimpse into what the current landscape is for research in this field and opens the door for their group or another to answer my questions and any others that may emerge as this strategy will no doubt be discussed for years to come.