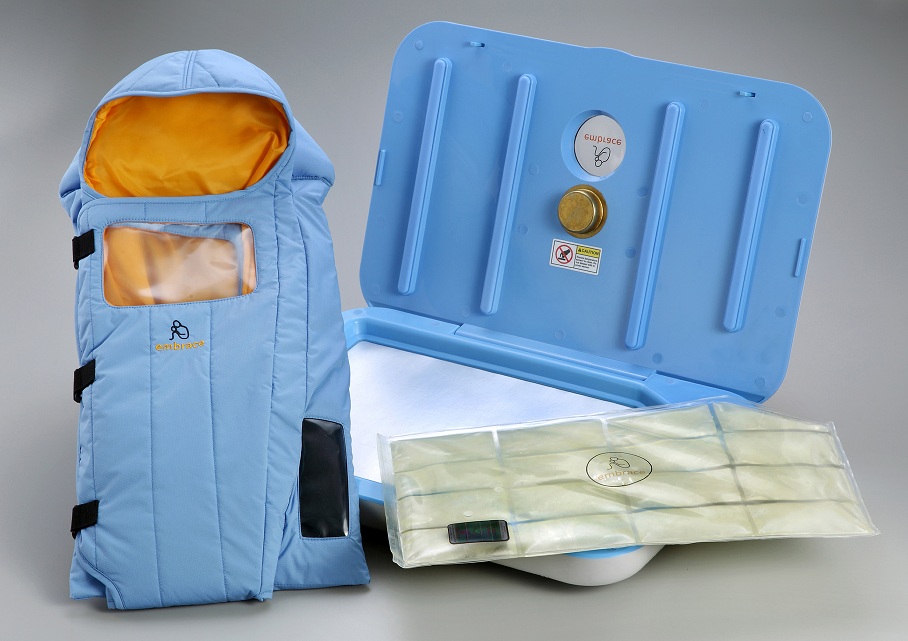 The Dangers of Hypothermia and A Novel Way to Prevent It. Applicability to Neonatal Transport?

In the modern day NICU thermoregulation is something that we are concerned with but due to the availability of servo controlled warmers in delivery suites hypothermia is becoming a rarer event.  Add to that we have access to polyurethane plastic wraps for our smallest infants and admission into servo controlled environments with additional humidity control and we have all the tools available to prevent hypothermia and it’s consequences.  Such adverse effects include hypoglycemia and lethargy the latter being a common cause of septic work-ups leading to increased antibiotic usage.  Such interventions are both painful and put the infant at risk of complications related to antibiotic use such as increased resistance, or altered microbiome with puts them at an increased risk of NEC.  Just published online today in fact, researchers from the Canadian Neonatal Network have shown a U shaped relationship between admission temperature and outcome (morbidity and mortality including ROP, BPD and NEC etc) from being hypo or hyperthermic on admission. http://bit.ly/1H2384x.  Clearly there is harm from being hypothermic so maintaining normothermia must be of prime importance in the care of our patients.

Sadly such technology does not exist everywhere and in developing nations the common alternatives may be non-servo controlled warmers, warmed blankets, cribs or Kangaroo Care (Skin to Skin).  There is no question that Skin to Skin (STS) care provides excellent thermoregulation and bonding for the parent and child but what do you do when the mother or father is unavailable (ill after delivery) or unwilling?  The benefits of STS to prevent hypothermia and infant mortality are striking and were first described in 1978 by Drs Rey and Martinez.  A brief history of the practice following their description can be found here http://bit.ly/1CgDm9t.

This study compared the above mentioned modes of warming infants with a warming mattress over a four hour period in a non-inferiority trial of temperature regulation.  The concept here is that the authors were simply trying to show that the use of the mattress as a thermoregulation device was just as good as the other means of controlling temperature.  For a video demonstrating this technology please look at http://embraceglobal.org/.  Briefly the system involved a containment device that has a paraffin based material that when preheated with an inexpensive electric heater absorbs the heat and then when placed in a pouch provides constant temperature regulation for a 4-6 hour period.  The pouch was subsequently placed in a mattress with wrap as shown in the video to yield the desired temperature regulation.  The authors of this study looked at a total of 160 infants with a birthweight between 1500 – 2499g in four centres located in India and observed infant temperatures hourly over a four hour period.  Temperatures were compared in each case between those randomized to the standard temperature regulation strategies in each centre versus the warming mattress.  The findings were in agreement with the hypothesis of the study in that the mattress was equivalent to the other methods of regulating temperature.

My first reaction when I read this paper was that it was interesting but did it really apply to our population?  As the authors suggest it was not a blinded intervention and over time, temperature regulation improved so could the Hawthorne effect be at play?  The infants in this study were larger (1500 – 2499g)  than the infants that we would typically put at highest risk.  Also how useful is an intervention that only lasts 4-6 hours when we need to care for these kids for weeks?  Lastly, I live in North America and work in an intensive care unit with access to state of the art equipment for thermoregulation and also have a team that proudly promotes STS care so is this really needed?  Despite all of these concerns the conclusion I have come to is that the technology provides reasonable thermoregulation for a 4-6 hour period.  Can this be applied to our patients in the end?  I think there may be a role.

I would see the role being in managing newly born infants in remote communities prior to the arrival of a Neonatal Transport Team.  In our own centre about 75% of our patients or about 230 patients are transferred from outside of the city borders. On occasion, a premature infant will be born in such places and hypothermia on arrival of the team is not an uncommon occurrence. In Manitoba and many parts of Canada there are communities that are quite isolated from tertiary care centres.  These centres have limited equipment and even then it can often be quite outdated if functioning properly at all.   Given that the average time to arrival for such infants is less than the 4-6 hours that the mattress provides warmth for, this would seem to be a very beneficial tool to have in such communities.  It appears to be the ideal product as the website indicates the following

As I write this I wonder how many other centres not just in Canada but also in the USA would benefit from looking into such technology.  Providing servo controlled infant warmers for each centre that delivers infants is certainly the gold standard and in fact is recommended for all neonates undergoing resuscitation at 10 minutes of age.  While ideal we need to acknowledge that some centres do not have such resources so this could very well serve a useful purpose particularly in the Northern US and Canada.  According to the Embrace website the concept for this came out of a student project at Stanford University with the goal of designing an infant warmer with a cost of <1% of a traditional infant warmer (about $20000).  If the cost is then $200 for the warmer for a completely reusable warming mattress I think they have hit the mark.

Finally, it must be pointed out again that the smallest infants treated in this way have been 1500g.  We do not know if smaller infants would remain normothermic or become hypothermic if the same paraffin sized material was utilized.  It will be interesting to see if Embrace releases a smaller unit for infants under 1500g.  If proven to be successful in maintaining normothermia in this population I believe the use of this device will become widespread.  Such a simple concept to treat a big problem in Neonatal Transport!