A recent post on the intranasal application of breast milk Can intranasal application of breastmilk cure severe IVH? garnered a lot of attention and importantly comments.  Many of the comments were related to other uses for breast milk (almost all of which I had no idea about).  A quick search by google uncovered MANY articles from the lay press on such uses from treating ear infections to diaper dermatitis.  One such article 6 Surprising Natural Uses For Breast Milk certainly makes this liquid gold sound like just that!  This got me thinking as I read through the claims as to how much of this is backed by science and how much is based on experience of mothers who have tried using breast milk for a variety of unconventional treatments.  I was intrigued by the claim about acne as with several family members nearing that wonderful period of the teenage years I wondered might there have been a treatment right under my nose all this time?  Before going on I will tell you what this post is not.  This is not going to be about telling everyone that this is a terrible idea. What this is about is breaking down the science that is behind the articles that have surfaced on the internet about its use.  I thought it was interesting and I hope you do too!

The story begins here (or at least this is the point that I found some evidence). A group of nanoengineering researchers published a paper entitled The antimicrobial activity of liposomal lauric acids against Propionibacterium acnes.  The authors examined the antibacterial effect of three fatty acids one of which was lauric acid (which is found in coconut oil but also in breast milk) against Propionibacterium acnes (P. acnes) the bacterium responsible for acne in those teen years.  The results in terms of dose response to lauric acid was quite significant. 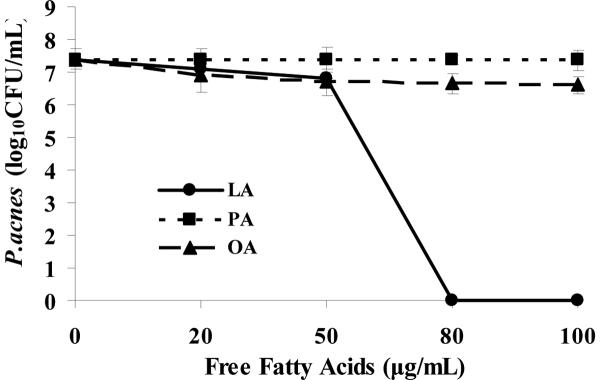 This is where the link in the story begins. Lauric acid kills P. Acne and it is found in high concentrations in breast milk so might topical application of breast milk treat acne?  From what I can see this concept didn’t take off right away but a few years later it would.

This same group published In vivo treatment of Propionibacterium acnes infection with liposomal lauric acids. in 2013.  This time around they used a mouse model and demonstrated activity against P. Acnes using a liposomal gel delivery system to get the Lauric acid onto the skin of the mouse.  Interestingly, the gel did not cause any irritation of the mouse skin but using the traditional benzoyl peroxide and salicylic acid caused severe irritation.  From this it appears that the news story broke about using breast milk to treat acne as I note several lay press news stories about the same after 2013.  Let’s be clear though about what the state of knowledge is at this point.  Lauric acid kills P. Acne without irritating skin in a mouse model.  As with many early discoveries people can get very excited and apply the same to humans after extrapolation.

What Happened Since Then?

Well, in late 2018 this study was released Design, preparation, and evaluation of liposomal gel formulations for treatment of acne: in vitro and in vivo studies. This is another animal study but this time in the rat which demonstrated application of the gel led to “∼2 fold reduction in comedones count and cytokines (TNF-α and IL-1β) on co-application with curcumin and lauric acid liposomal gel compared to placebo treated group.”  Essentially, comedones were reduced and markers of inflammation.  So not only do we see an antimicrobial effect, once the bacteria are erradicated, there is a clinical reduction in acne lesions!

Where do we go from here?

This story is still evolving.  Based on the animal research thus far here is what I believe.

2. Lauric acid provided in a gel form and topically applied to rodents with acne can achieve clinical benefits.

3. Whereas current standard treatments of benzoyl peroxide and salicylic acid cause inflammation of the skin with a red complexion, lauric acid does not seem to have that effect.

These are pretty incredible findings and I have no doubt, pharmaceutical companies will be bringing forth treatments with lauric acid face creams (they already exist) with a target for acne soon enough.  The question though is whether families should go the “natural route” and apply expressed breast milk to their teenagers face.  Aside from the issue of whether or not your teenager would allow that if they knew what it was the other question is what might grow on the skin where breast milk is left.  I am not aware of any further studies looking at other bacteria (since P. Acnes certainly isn’t welcome around breast milk) but that is one potential concern.

In the end though I think the research is still a little premature.  We don’t have human trials at this point although I suspect they are coming.  Can I say this is a terrible idea if you are currently using breast milk in such a fashion?  I suppose I can’t as there is some data presented above that would give some credibility to the strategy.  I am curious for those who read this post what your experience has been if you have used breast milk for acne or for other skin conditions.

Does it really work?!?