Why does my baby need ultrasounds of their brain? 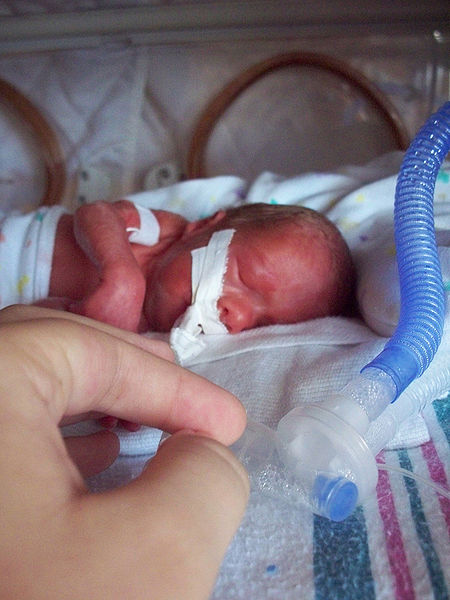 Sometime between a week to two weeks you will hear that an ultrasound of your baby’s brain has been ordered. What the team is looking for here is bleeding eithre within the fluid filled chambers of the ventricles (appear black in the picture below with blood that shows up as white). This early ultrasound is meant to pick up this type of injury while one done a few weeks later attempts to pick something else up.

Bleeding occurs due to the fragile naure of the brain tissue when born preterm. The more preterm an infant is the greater the risk of a signficant amount of bleeding. Bleeding tends to occur from an area of the brain just under the lining of the fluid filled ventricles that has a very rich blood supply. Anything that causes fluctuations in blood flow to this area of the brain can lead to injury and bleeding from this site. Blood in the ventricles of the brain is referred to as an Intraventricular hemorrhage or IVH for short.

Classically you will hear the team discuss the results of your baby’s head ultrasounds as having one of five possible categories.

A grade 3 IVH is shown below with the chambers swelling (black).

What can happen if the bleeding is significant?

It is the Grade 3 and 4 bleeds that we really worry about. The grade 1 bleeds tend to resolve on their own. When we see a bleed you can expect to see a new ultrasound be done in 1-2 weeks to folllow up and make sure it doesn’t get worse. If a grade 3 bleed continues to cause the ventricles to increase in size we worry with time that this may put pressure on the brain and affect the amount of blood flow the brain receives. If this is happening you may hear that we are asking Neurosurgery to see your infant. They will work with us to determine whether your baby needs a drain put into the ventricle to help get rid of the excess fluid. Many times the ventricles as we watch them with additional ultrasounds get smaller with time but some do not and will need this plastic drain put in to allow the brain to have this pressure relieved.

With the Grade 4 bleeds with time the body will absorb this damaged tissue and your baby may be left with a hole in the brain where the injured tissue was. While this sounds frightening the ability of our ultrasounds to predict eventual outcome is not great. Such infants though will generally be followed in a high risk follow up clinic and carefully monitored for their development. If they are found to have any deficits, depending on your location a variety of services may be offered to help optimize the best chance for a good outcome. Such services might include involvement of an occupational therapist or physiotherapist.

Sometime between about 4-6 weeks after birth or in some cases near discharge another ultrasound will be done. This time the team is looking for something different. The risk of fresh bleeding has passed but now we are looking for evidene of a lack of blood supply at some point from the arteries that provide blood supply to the brain. Many weeks after being born if there has been a period of significant impairment of blood flow to the brain we may see evidence of this. The brain has both white and gray matter (tissue). The gray matter is all along the surface of the brain. Underneath though and right next to the ventricles is the white mattter. This white matter is where the injury we are looking for may have occurrred. We call this injury periventricular leukomalacia. This means injury to the white matter. The white matter is where our neurological tissue for motor function travels so in these infants with such injury there can be problems with normal movement in the legs usually, moreso than the arms. Assessments in babies with such injury may find increases in the muscle tone in the NICU. In such cases, referral to a physiotherapist early to teach families how to do stretching exercises as an example will be done. Similarly, positioning devices from an occupational therapist may also be recommended.